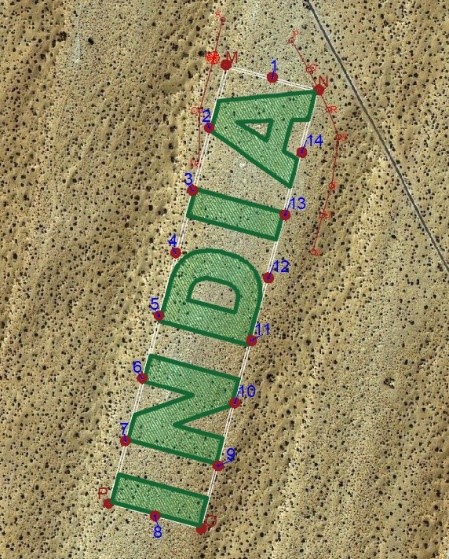 SankalpTaru Foundation implemented an afforestation approach in the middle of Thar Desert based on concepts of sustainable agroforestry and active community engagement. The name of the project is ‘Mission India’ because alphabets will be written in INDIA with trees. The site is very close to the Indo – Pak border and located in the heart of the Thar Desert District Jaisalmer, Rajasthan with no greenery around. The Program is aimed to plant 5500 trees, across 8 hectares of land to promote bio-diversity and grow the plantation block as a mini-forest in long term.

In the western part of Rajasthan State lies the extensive Thar Desert – which is covered in rolling dunes of sand for almost its whole expanse. It is noted that the annual precipitation in its north-eastern area is 200 mm to 300 mm; where, it has dry fauna with temporary vegetation during rainy season However, towards the western region, the amount of precipitation and vegetation continues to decline further. Due to this situation, the local residents rear pasture animals and grow single crop during rainy season Being an arid area, the rainfall varies each year and income is not stable. Further, the residents are socially isolated as they reside in nearly 500 villages scattered around the desert with limited communication and road connectivity. Moreover, the desertification is noted to increase exponentially (JICA, 2003*); which, impacts existence of several villages and makes its infrastructure severely fragile.The agriculture has emerged to be affected from erratic rainfall, desertification and decreasing arability of existing soil. SankalpTaru Foundation, recognized the need to work with rural communities to slowdown on-going desertification and provide sustained means of livelihood.

We at SankalpTaru are pioneer in creating socio- environmental impact in the areas identified as critical based on our self- sustainable and livelihood supportive ecosystem models It can be observed that the current study presents how sustainable management of agricultural land can aid in improving livelihood of farmers in the arid regions of India.

This can be achieved by:

i. Adding to green cover in Thar, Rajasthan which is surrounded by a desert

With our past experience in the arid region, we are already maintaining a healthy survival rate of more than 95%

ONGC intended to carry out a community plantation program around their operational areas in District Jaisalmer, Rajasthan. The site is very close to the Indo – Pak border and located in the heart of the Thar Desert with no greenery around. The Program is aimed to plant 5500 trees, across 8 hectares of land to  promote bio-diversity and grow the plantation block as a mini-forest in long term.

SankalpTaru Foundation implemented an afforestation approach in the middle of Thar Desert based on concepts of sustainable agroforestry and active community engagement. The extensive literature survey shows that local communities are often left out of decision-making processes during forest refurbishment and management; and are allowed to ‘participate’ during execution stage.

The area has close to zero greenery. This shows the severity of hot weather and dry terrain which is not able to sustain plantation easily. Availability of water is a huge challenge. Yet, there is a bore well at some distance from the site through which water can be obtained.

The surrounding area is severely struck with poverty and the native villagers do not even have proper houses to live. The villagers sustain themselves through cattle farming but due to severe water issues, there is no vegetation for cattle grazing.The area has huge potential for plantation as the community representatives showed extreme interest in planting trees which would also help them in procuring fodder for their livestock.

To overcome these challenges and create a positive socio-environment SankalpTaru started a community-based plantation program on the theme “Gaanv ka jungle, Gaanv ke liye” (a forest by villagers, for the village).

With our increased focus on community participation, we would strive to create a self-enthusiastic eco-system where every villager feels responsible to take care of the plantation blocks. On the whole this program would not only limit to tree plantation but also in achieving higher goals of creating a wide socio-environmental impact and becoming popular among the local masses

The name of the project is ‘Mission India’ because we will be writing the alphabets INDIA with trees.  The nation’s name written in green in the midst of the desert will not only stand out like an oasis but also fill one with the feeling of patriotism.

A masterplan of the site was created keeping in mind the site topography, existing road and mounds. It lies only 20 km away from the India – Pakistan border. We decided to write the alphabets INDIA with the plantation to make the greenery stand out in the otherwise harsh landscape.

The alphabets INDIA placed on site – they are strategically placed between two mounds, parallel to them because planting on the mounds will be difficult.

After studying the wind pattern and tree plantation in areas that receive strong winds, a plantation plan was evolved.

Ghotaru’s barren and deserted land supports only a few Babool trees (Acacia tortilis) or other weeds which had to be remove to make the land suitable for plantation. The site was cleared through a JCB as well as manually.

To safeguard the site from cattle and wild animals, fencing is being done around the site periphery (1700 m in length) using stone pillars at every 20 feet and barbed wire.

Co-ordinates of each point of the alphabet derived through satellite imaging is located on site through a GPS device and marked with flags.

Co-ordinates of each point of the alphabet derived through satellite imaging is located on site through a GPS device and marked with flags.

Fast-growing, native species with high productivity are recommended for restoring the lands in order to increase productivity and enrichment of biodiversity. We have also discussed preference of community members in this regard during our baseline survey.

Based on the analysis of existing vegetation in the area and our discussions with the villagers, few of the species we propose to plant are: Neem, Arjun, Khair, Shami, Karanj, Peepal, Shirish, Sheesham etc.

Environmental Impact of the Project:

Plantation programs have been developed to meet the needs of farmers and with the main objective of protecting biodiversity. Environmental sustainability is achieved by planting various native species which increases the biodiversity index. Increase in green cover enhances the growth of natural eco-system creating a natural habitat attracting wildlife species. In addition to increase the green cover, our project aims at stimulating a community participation driven ecosystem which works towards nurturing plant species, restoring and managing the forest block without disturbing the natural vegetation

Socio Impact of the Project:

Our multi-facet approach revolves around creating a wide social impact which goes beyond a typical plantation program adding benefits to the communities. The green belting project has brought numerous advantages to the biodiversity of the entire region, and the local populations has not only economically enriched themselves but have also secured their livelihood in terms of long-term employment and sustainability.

SankalpTaru Foundation would like to scale up the Plantation of more 10,000 to 60,000 trees around INDIA on community land in Barmer and Jaisalmer District of Rajasthan wherein we intend to achieve the following objectives: