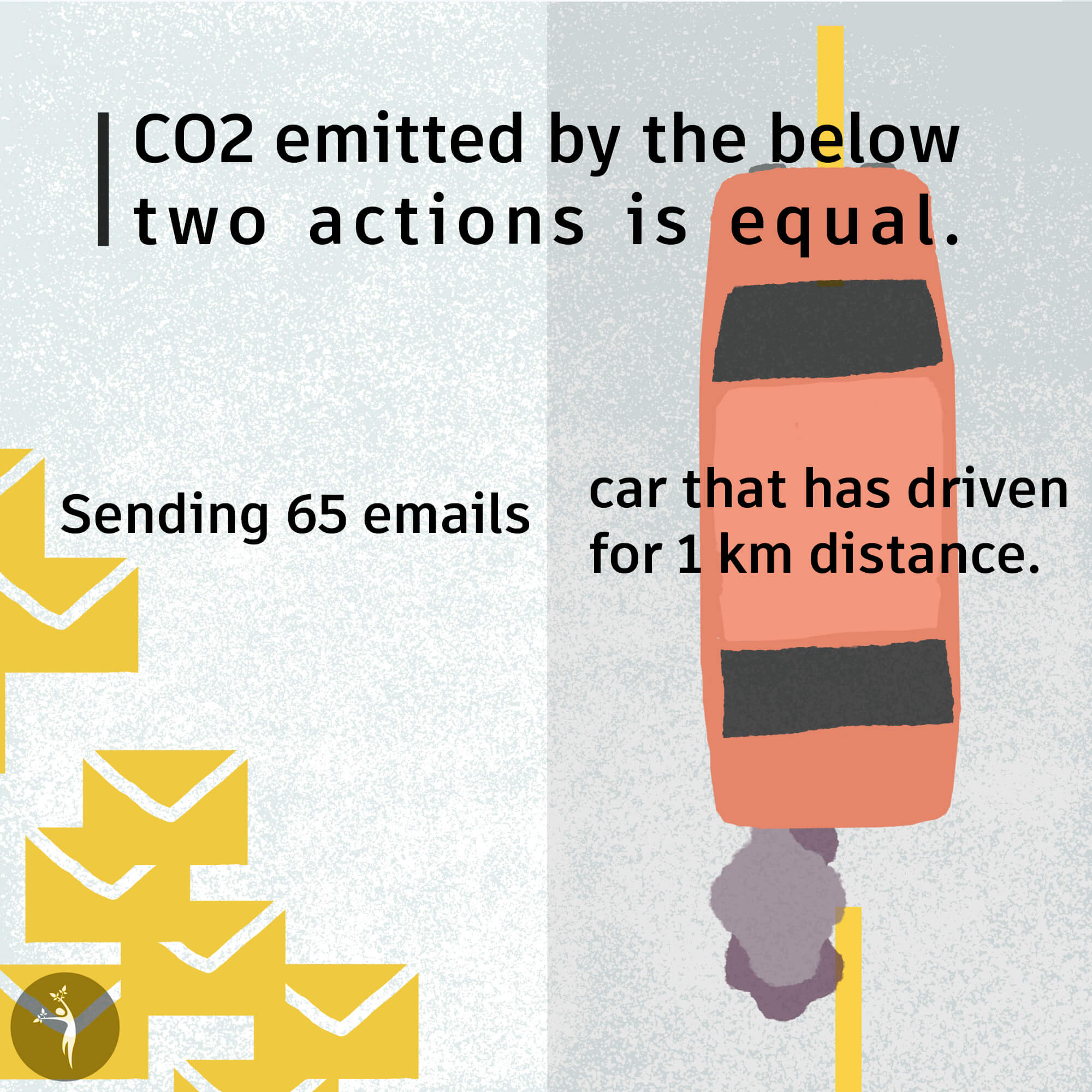 “Beware of little expenses; a small leak will sink a great ship.”-Benjamin Franklin.

The article starts with this quote for a reason which will speak to you with more clarity as you will drift through the facts and figures given below.

Are you amongst the ones who worked from home this entire lockdown, thinking that they at least saved some petrol and carbon emissions?

You could possibly have managed to save some petrol, but you were still emitting carbon by sending those daily emails to your bosses and subordinates. Want to know how?

Sending 65 emails produces the same amount of carbon emissions as a car driven for a kilometre.

“Goodness me! Are you kidding?”

“But emails are stored on the cloud, right? How are they responsible for carbon emissions?”

Clouds are nothing but storage centres on “ground”, requiring electricity for their operation and maintenance.

These colossal data centres produce a humongous amount of heat and hence need an HVAC (Heat Ventilation and Air Cooling) System to work at a stable temperature and condition.

Some studies have shown that only 40% of the energy coming up is used to run workloads, and the rest is “wasted” through cooling. The data centres use custom cooling technologies which often utilize carbon-excessive air conditioners and fans.

IT-related services account for almost 2% of global emissions, according to the Greenpeace report.

According to the book by Mike Berners-Lee, “How bad are Bananas? The Carbon Footprint of Everything”, the carbon footprint of a spam email is 0.3g, proper email is 4g. If the email is sent with large attachments, it can go up to 50g per email.  Also, in the book, he has stated that around 62 trillion spam messages are sent every year, requiring the use of 33 billion units of electricity and causing about 20 million tons of CO2 emissions per year.

So, if my carbon footprint via email is 24.09 kg per year, I need to plant two trees a year to offset this emission.

“How did I calculate that?”

Let me share the secret with you as well. I receive and send almost “20” emails in a day. The carbon footprint of my mailbox is:

Approximately, by email, my carbon footprint (in kg) in a year is 1.2 times the number of emails you are receiving/sending in a day.

To calculate yours, replace “20” with the number of emails you receive or send in a year. You can also re-verify the calculation by clicking on the link.

Microsoft, Amazon and Google have also acknowledged this fact and are now operating all their data centres with renewable energy.

Some of the companies already started using renewable energy, but the majority of the bulk are still relying on fossil fuels for electricity. IT companies are trying to become as sustainable as possible and are making their infrastructure as efficient as possible. But we as an individual can also contribute from our end to reduce the footprint.

About 4.1 Billion people among 7+ billion are online, and the number is only going to increase. Cyberspace consumes gigawatts of electricity every moment, and yes, our social media is a cyber galaxy in this cyberspace with Facebook, Instagram, Twitter, and other social media are some of the cyber planets. Moreover, we have a massive amount of data online. Maybe in tons of gigabytes. Our old emails, tweets, messages and whatnot.

We can start by deleting the old emails from our work and personal life, which are not required now or are of insignificant use. Facebook has the option of deleting old posts in bulk. (We know the posts are attached with memories and emotions, so we are not asking to delete them. It’s just an option ‘ IF ’ you want to delete it.) For Twitter, you can use deletetweet.net to delete your old tweets.

The current rising in greenhouse gases is a significant factor for climate change, and CO2 is a major contributor among the GHGs. The CO2 emissions that we are aware of are from the Aviation industry, electricity generation from fossil fuels, and all such things highlighted in the books. But via this blog, we have tried to show you the invisible CO2 in the atmosphere emitted indirectly and unknowingly from our end.

Again, we would leave you with a thought on this and end this blog with a quote from former Secretary-General of the United Nations Ban Ki-Moon,

“We are the first generation to be able to end poverty, and the last generation that can take steps to avoid the worst impacts of climate change. Future generations will judge us harshly if we fail to uphold our moral and historical responsibilities.”